We now have more evidence to sue the UK government

Last summer, I wrote an open scientific letter to warn about the nature of the mRNA encoding the spike protein and how it would likely result in DNA mutation and the development of cancer, especially in people with family history of cancer, with immunosuppression and other significant co-morbidities. Then, I sent that letter to my local MP in the UK, who then let me know that he raised my concerns with the Department of Health and Social Care. In the letter, I referenced relevant data that had been available at that time, and warned that the continuation of the chaotic mass COVID-19 vaccination campaigns and the implementation of the unconstitutional governmental rules with regards to mandatory vaccination would result in an unprecedented number of cases of cancer as a result of LINE-1 Reverse Transcriptase-induced mutation. I highlighted that the origins of the genetic material of the virus was the reason why there would be induced mutation, since there are nucleotides from a retrovirus (HIV-1) present in it, and the gain-of-function research in the Institute of Virology in Wuhan was likely the cause. A natural mRNA rarely has small fragments reverse transcribed and integrated into the DNA of the host cell.

The following is the open letter that I sent to my local MP in June last year (please note that I have hidden my name and my current and past higher education institutions that I attended, for my own safety and for the purpose of evidence gathering): 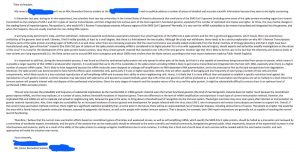 One mistake that I made at that time is that I said the mRNA for the spike protein would multiply once it was injected into the deltoid muscle in the upper arm, when in fact, the mRNA does not multiply, but is resistant to RNA-degrading enzymes from a couple of days to a couple of weeks, because it is genetically modified (contains nucleotides with pseudouridine, instead of uridine) and is protected by an outer layer of lipid nanoparticles, so it can freely travel into as many cells as possible, so a proper immune memory would be built in the end, but it seems that it is really difficult to reach a middle line, which would include both safety and a lasting immune memory. There is not a major difference between these two scenarios, since the mRNA would enter a similar number of cells whether it would be self-amplifying or genetically-modified and likewise, both would cause similar risks of mutations and cancer.

The following is the reply from the UK’s Minister of COVID-19 Vaccine Deployment from August last year: 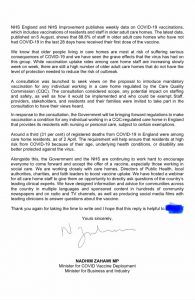 I believe the reply letter from the Department of Health and Social Care was far from responsible enough, since it did not address any of my concerns with regards to significant implications of the vaccinal mRNA upon human genetics and molecular biology. Likewise, I insisted and sent a much more developed letter, and this time, I did not receive a reply from the government, although my local MP did a marvellous job at communicating my renewed concerns to the executive power. Throughout the autumn and the winter, I continued to collect new evidence and add it to my open scientific letter, which in theory was on the table of the Department of Health and Social Care, but still, I received no response and the actions of the government showed a reckless attitude to the concerns that have a very significant statistical value.

Furthermore, they continued with the booster rollout and recently, they announced that a second booster would be offered to the people aged over 75 and to all people suffering from immunosuppression during the spring of 2022, and their mass vaccination campaign misled people into believing in a safety and efficacy, and as a result, there have officially been over 2,000 deaths as a result of the adverse reactions, and these included children and elderly people. The actual number of deaths may be as high as 200,000, since only 1-10% of the side effects and casualties are generally reported via the vaccine Yellow Card scheme of the MHRA. This looks to be true, since over 40,000 deaths post-COVID-19 vaccines have been reported so far in the EU, and this is a much higher number for a continental population that is not as much greater in size than the population of the British Isles.

Recently, a peer-reviewed scientific paper containing in-vitro studies was published on MDPI.com, proving that human liver cells are vulnerable to LINE-1 Reverse Transcriptase-induced mutation as a result of the administration of the BNT162b2 vaccine. Once relatively short fragments of the vaccinal mRNA become DNA as a result of LINE-1 Reverse Transcription, it will only be natural for the DNA Integrases to bring the new DNA nucleotides into various areas of the cell’s genome, including areas of important genes. Likewise, there are certain risks of genome toxicity, mutation and tumourigenesis, and such problems usually take years to physically manifest. The difference is that previous studies were not peer-reviewed, probably because of the censorship that’s been heavily infiltrated in the scientific community, and now there is clear-cut evidence that the mRNA for the spike protein (both in the virus and in the vaccine) causes genomic toxicity, mutations and the formation of tumours in numerous cases, and again, I stress that certain groups of people will be affected pronouncedly more frequently than the others. 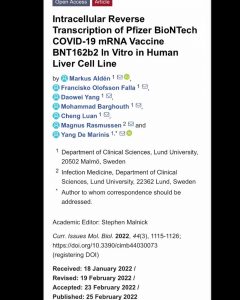 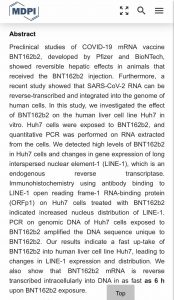 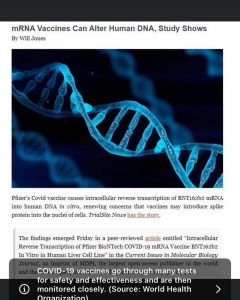 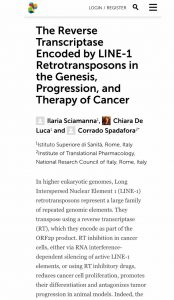