A revisit of the terrain and germ theories 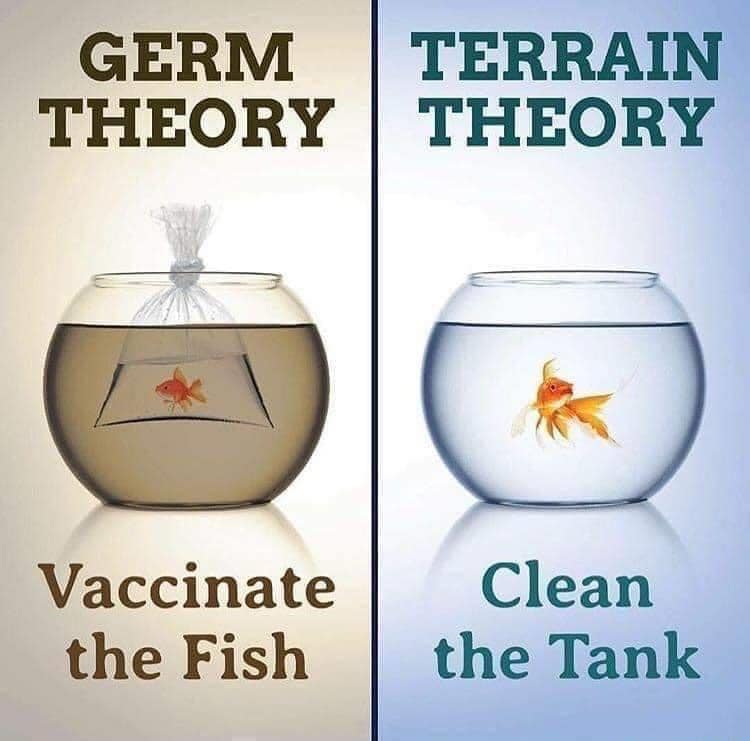 I believe the current conversation in the immunological arenas of research and innovation require a revisit of the germ and terrain theories, as recent research with regards to viral evolution and immune evasion imply that the terrain has a more significant power than previously believed. In this case, the host immune system seems to be an important component of the terrain, and not the environment, since the immune system already represents an environment for viruses. In other words, the Theory of Relativity comes into play here as well, given that, once the primary layer of matter (physics) is subject to Relativity, it means that automatically the second (chemistry) and third (biology) layers of matter are subject too. This would mean that whichever element of nature that is not part of the germ is automatically part of the terrain. And it is perhaps to be noted that germs are part of the environment too and that they use their own defense mechanisms to survive as well. This analysis is not suppressing the fact that germs have their own power, nor is it suppressing the fact that humans are unique living organisms and not some simple environmental structures, and in some places it is even the contrary, where I emphasise upon the tricky mechanisms of viruses to suppress important parts of the terrain (human immunity). I currently project that terrain is around 75-80% important, whilst germs are around 20-25%, not because germs are not as powerful and intelligent as previously mentioned, but because calibrating the immune terrain will make it much more powerful than previously thought, not by physical means, but by means of immune intelligence and wisdom.

Namely, pathogens developed mechanisms to temporarily silence important areas of the innate and adaptive immune systems to be able to replicate fast, and once a delayed immune response would take place, the immune system would often become overwhelmed because many more cells would have been infected by then. The key for an effective immune response is that there is a restricted amount of pro-inflammatory immune signals produced, and that can only happen when first-line immune defences are built by the time the first cells become infected, lest there will be countless infected cells that will eventually result in the production of countless pro-inflammatory cytokines, which will cause the overall immune system to become “confused”. The same applies to the disease caused by the novel coronavirus, as the main problem is not about how the virus infects and replicates in the human body, but about how the immune system reacts to the virus. SARS-CoV-2 has evolutionary abilities that suppress all essential areas of human immunity. Nevertheless, the intelligence of the virus can actually be trampled upon by an increased intelligence and wisdom of the immune system, and all we require to make such improvements is to provide the communities with the right tools in prophylaxis and early therapy, which are most likely very accessible and cheap in price, as the level of demand most likely cannot reach a close extent to the level of availability. This is a matter of a general will to push for a potential revolution in human immunology and vaccinology.

A careful analysis of the foundations of the immune system may help us find new patterns in research, innovation and academia. Just as focusing too much on the negative side of a story will give more power to negativity, so is it with regards to focusing too much on germs; it will give germs more power. Rediscovering the hidden gems and powers of the human body and immunity will most probably give us back the tools and power we need to preserve the entire mankind against pathogenic agents of concern in the world. Excessive fear and control will only give more power to pathogens and consequently, will bring mankind to higher levels of unnecessary struggle and difficulty. True progress implicates the acknowledgment of past mistakes in the journey of evolution, and it acknowledges the good sides of past innovation and how the mistakes were possibly ultimately needed in order for us to find greater layers of true scientific facts. Maybe it is our past mistakes and slightly distorted views on the strength of the terrain and germs that led us to develop imperfect approaches to empower the human body against infectious diseases of concern. Furthermore, it is perhaps this slightly distorted perception on the matter that led us to lose our balance in the approach to tackle disease and even neglect the fine bridges between the developmental rate of adaptive immunity and extent of neurogenesis (production rate of neurons). Namely, an excessive focus on immunising babies against all pathogens with moderate and high intensity has likely and sadly resulted in increased rates of neurogenesis in certain important sub-regions of their brain, which in turn has caused the rates of neurogenesis in other important sub-regions of their brain to be impaired. In other words, it is likely that we have already exchanged freedom for health to safety against several microbes of moderate and high intensity. Interestingly, both the widespread phenomenon of immune “confusion” caused by delayed first-line immune responses during certain viral infections and the increased rate of immunologically-induced neurodevelopmental delays are associated with a higher incidence of induced autoimmune disease. Moreover, viral disease-related autoimmunity is associated with a higher incidence of LINE-1 Reverse Transcriptase-induced mutation and tumourigenesis (formation of cancerous tumours). One must wonder, does everything actually tend to be interconnected?

Overall, the job is to provide ourselves with the most needed change is to start demanding for a healthy approach to empower the human terrain in front of microbes with developed level of intelligence in a manner that involves all areas of scientific discernment, and wisdom represents an important value that helps scientists maintain their full discernment in research. We require to actively petition the scientists and politicians to review scientific data using the latest evidence (possibly including data mentioned in this thread) and above all, we require to open our minds more.