The recent events in Paris are unprecedented 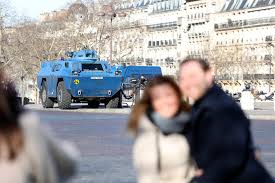 We are aware that riot police officers did not bring a particularly well and peaceful policing of anti-establishment protests in Paris for the last four years, and many times, they provoked crowds into violence before they brutally dispersed them, especially during the Yellow Vest protests. The Yellow Vest protests in 2018 became at one point so big that Macron once thought about fleeing the Elysée Palace with a helicopter, despite the heavy handed police operation to disperse crowds in the city.

But what happened last Saturday should raise the eyebrows of the entire world. Authorities in Paris expected the French Freedom Convoy to arrive and they tried to block the drivers and truckers from entering the capital. They did so by sending armed vehicles and numerous police vans, and many drivers that entered Paris were given substantial fines for breaching public order. Later in the afternoon, riot police started cracking down on thousands of peaceful protesters and after the night started, they became incredibly brutal. They started throwing tear gas bullets from the sky, beating people and kicking them onto the ground, and riot police officers managed to kill an 80 year-old woman with a tear gas canister. We are aware the mainstream media has yet again done a marvellous job at hiding facts from the public, just as they did in Netherlands during an evening protest of thousands, when police officers shot with rubber bullets and severely injured two.

What does the future look like with politicians like Emmanuel Macron and Ursula Von der Leyen? They are no different than Daniel Andrews, Scott Morrison and Jacinda Arden, who have religiously been following orders from the globalist overlords. Such politicians have only been oppressing their citizens and lied to their followers. The good news is that their time is coming, sooner or later, no matter how they are trying to change their strategies and bring several countries at war against Russia, which is a super-power. They might even be planning for cyber-attacks and then blame Russia for it, all to cover up their disgusting and unprecedented crimes against humanity. Hence, we need to print the evidence and protect the truth because the word “defeat” is not in the thinking of the overlords, let alone their vocabulary.

We all need to join the Worldwide Freedom Convoy. These people are the frontline workers of democracy, and threats of crackdown from governments should scare no one at this point. We might not be able to connect to the internet or even call our loved ones if these major cyber-attacks occur. We are here to protect the very essence of democracy, and not to support anarchy or unfounded conspiracy theories. We are here to say NO to wars that benefit the political mafias and cost the lives of honest, hard-working people. We are here to protect real science and eliminate all the lies that this worldwide establishment has given mankind for a long time. All the politicians in charge of the pandemic fraud, fear-mongering and trying to push countries in war for corrupt financial interests should be held to an account at the Grand Jury.

We have had enough.