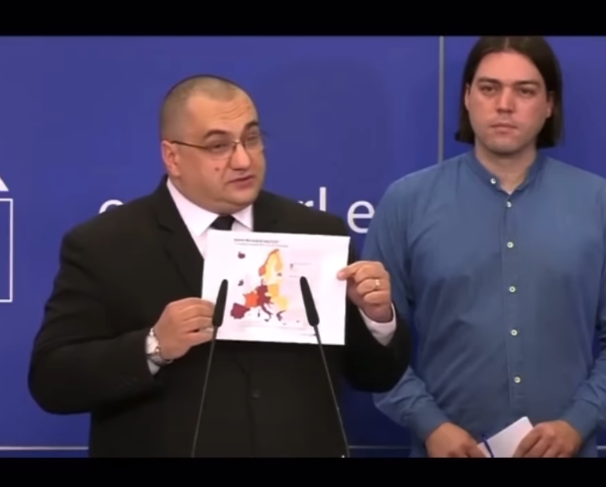 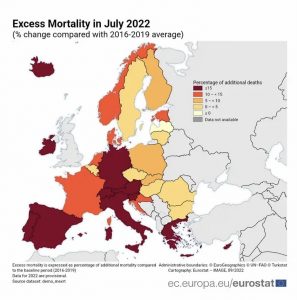 There can no more denying of the truth. Further denying of the evident is now equivalent to one burying his/her head into the sand. As numerous figures around the world are coming forward and revealing that they changed their minds with regards to their stance on the COVID-19 vaccine passports, a new round of discussions took place in the European Parliament. Namely, MEP Cristian Terhes has challenged the health narrative again and this time, he came with statistical evidence collected from Eurostat that the higher the proportion of vaccinated population, the higher the number of excess deaths it is. In a normal situation, the number of excess deaths would have been higher in unvaccinated and more highly exposed areas of Europe, but this is not the case at all. Moreover, heads from the Pfizer corporation recently admitted that the COVID-19 mRNA vaccines were not tested for prevention of infection, and the news rapidly spread around the world, despite the still significant efforts of mainstream media agencies and social media networks to label the news as misleading. Likewise, there is no shadow of a doubt that natural immunity is doing its job better than previously expected and projected, given that the virus and the spike protein can show outstanding levels of immune evasion, which in turn leads to the onset of significant forms of the disease, particularly in people with one or more co-morbidities.

Furthermore, MEP Cristian Terhes has challenged the way Pfizer already started testing new vaccines only three days after the Chinese government released the data on the genetic information or part of the genetic information of the novel coronavirus. At that time, there was a considerable number of medical whistleblowers in China that spoke out about how the virus had undergone genetic manipulation (gain-of-function research) in the Wuhan Institute of Virology laboratory to test the way the immune system of bats would respond to it. It is strange that many of such whistleblowers then were “disappeared” by the communist regime in China. It is also unacceptable that, in a democratic world, the head body of health authorities that is called the World Health Organisation, persistently gave excess credibility and sided with a communist regime, thereby ignoring the warnings that came from whistleblowers that had high credibility. Furthermore, the health systems in Romania and Bulgaria are much more neglected and underfunded than the health systems in Western Europe, and yet, the proportion of excess deaths in 2022 is well under 5%, compared to Western Europe, where the proportion of excess deaths is often above 15%. In Australia, statistical data recently showed a proportion of excess deaths that is 17% higher than average. This represents direct and frankly, irrefutable evidence that the COVID-19 vaccine campaigns have sadly brought a massive price on human health and life. And the resulted alteration and loss of human life also caused the number of patients on the waiting lists for other forms of treatment to rise considerably. As a result, the health authorities and leading corporations have sadly caused the health systems in the West to be overwhelmed with high numbers of routine patients and requests for diverse important forms of treatment.

Overall, we have been indirectly put at the “mercy” of a global superpower and we oppressed the people of the free world that simply challenged the wishes of elitist authorities to introduce elements of dictatorship in the name of fighting against a viral disease with a mortality rate well under 1% for healthy people, and under 0.01% for healthy young people. Then, we continuously ignored scientists who came up with prophylactic, immunising and early treatment methods that would have saved millions of people worldwide, as we bowed down to health corporations that have a record criminal history in the world’s modern history. In other words, the time when good is called evil and evil is called good may sadly have arrived. But let us not lose hope and be encouraged that we still have the power to make a difference that would truly, truly make this world a better place for all. We are requesting major courts of law worldwide to do their job that the public hired them for via democratic election and payment of taxes, to take robust action so the truth will be known among members of the public and so justice will truly take place!

Maybe the Truth just needs to make an impact in the depths of our hearts and minds so we will finally change and make a change. So, let us avoid despair, embrace hope and care for the people around us, instead of giving in to further hate and division.

P.S. Fact checkers in academia and in the medical community have already started disputing the claim that Pfizer admitted there was no test to check the extent of prevention, saying that the context is wrong and that the first tests are not meant to verify the extent of viral transmission prevention. This may be true, but it does not dispute the fact that the vaccine did not prevent infection and the onset of severe disease in a high number of people after all. This does not dispute the fact that the number of vaccine-related deaths is around the same as the number of deaths directly resulted from COVID-19, if not even higher unofficially. As a graduate in medical sciences, I say the constant denying of such facts is disgraceful and I strongly suggest that such people to pick the side of the civic society before they reach the point of no return; becoming a negative example in history.