The media is mocking millions protesting at -30°C 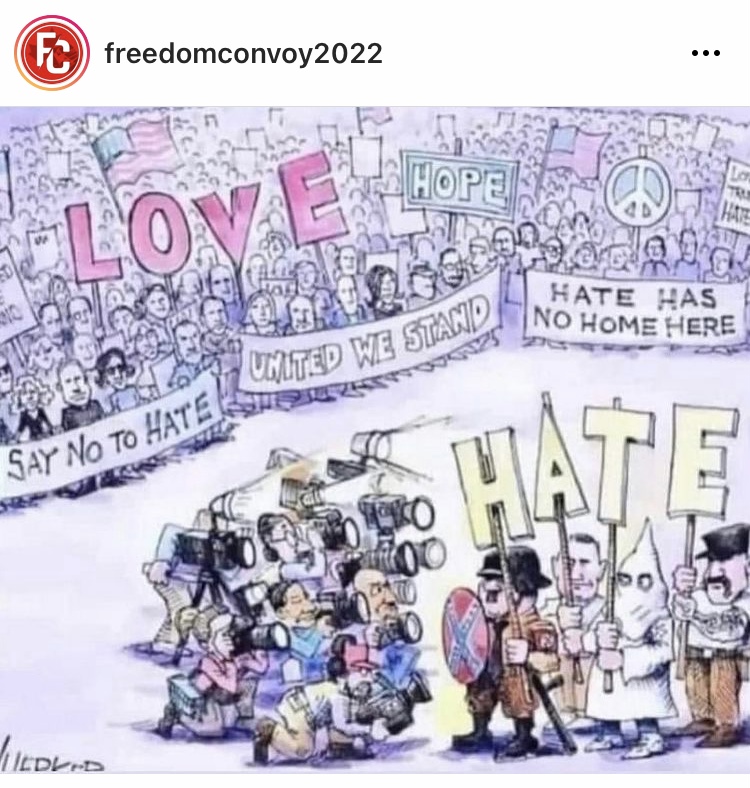 The unacceptable behaviour of the mainstream journalists and politicians in Canada and in numerous other countries shows whom they are actually supporting. They have continued to bear rotten fruit whilst claiming they supported democracy. Millions of protestors in Canada have been mocked and even been accused of endorsing extremism. But the masses of heroes are not having it; they are not returning negativity to negativity. Instead, they are continuing the peaceful resistance and they are offering the other cheek to any provocateur or abusive authority. The protestors were quick to eliminate every individual who showed up with “Confederate” and “Swastika” flags, and this is a reminder that the people will not tolerate one inch of hate, violence, lies and manipulation. Perhaps, these corrupt journalists who lie about good people should look in their mirrors and ask themselves serious questions about how their behaviour goes against any sort of ethics they once proudly mentioned they would stand up for. Maybe the people will soon have ex-mainstream media journalists joining them and admitting that they had been deceived. Although some of us may not be seeing it, the number of people waking up is continuing to increase and the tide will be turning soon in our favour.

Mainstream media journalists were very quick to take pictures and film paid infiltrators, and they refused to report the greatest gathering of peaceful protestors in the history of Canada. We should not forget that such behaviours come from taxpayer money, meaning that these media agencies are lying and manipulating using public money. It does not matter that there are numerous journalistic agencies, since they have monopolised journalism and separated independent agencies. Journalists who do not agree with the official narrative have become the new outspoken rebels in a dictatorial regime, in which masses of people have been pressurised to take medical decisions which otherwise they would not have. These days, Canada is experiencing what Eastern Europe experienced before the downfall of communism in 1989, but on a different dimension and under a blanket of “progressive democracy”. Maybe it is time for the entire world to receive herd immunity against all sorts of dictatorship.

Justin Trudeau has broken his own isolation rules and ran with his family to a secret location. Wait a second, I thought that he could still pass on the disease to others and potentially put the lives of his older relatives at risk! Well, this might be yet just another sign that corrupt politicians know more than the general public does. Making us live in fear whilst travelling and moving around with fellow politicians, mates from giant corporations and family members like the disease is not a big problem. Maybe it is time for the general public to finally understand the reality of the situation, especially the fact that Omicron is slightly more than ten-fold less deadly than Delta, which had a 0.5% mortality rate for the general public anyway.

More and more countries around the world are starting their own trucker freedom convoys, and there are signs of an increasing number of cracks in the narrative. Canada has become an example in the world with regards to protecting essential human rights. Perhaps, corrupt politicians, health authorities and journalists are starting to fear a public uprising and that is why they are eliminating almost all restrictions in a number of important countries. Well, they should fear us because their restrictions upon essential life cost many livelihoods and the monopolisation of COVID-19 in the health system caused the death of many people with underlying health conditions, whose lives could have otherwise been saved.

The world will never be able to thank the truckers enough. They are absolute heroes and people like me who were losing hope on multiple occasions, have received that shiny dose of it which we were not expecting. We are getting close to an actual light from the end of the tunnel.