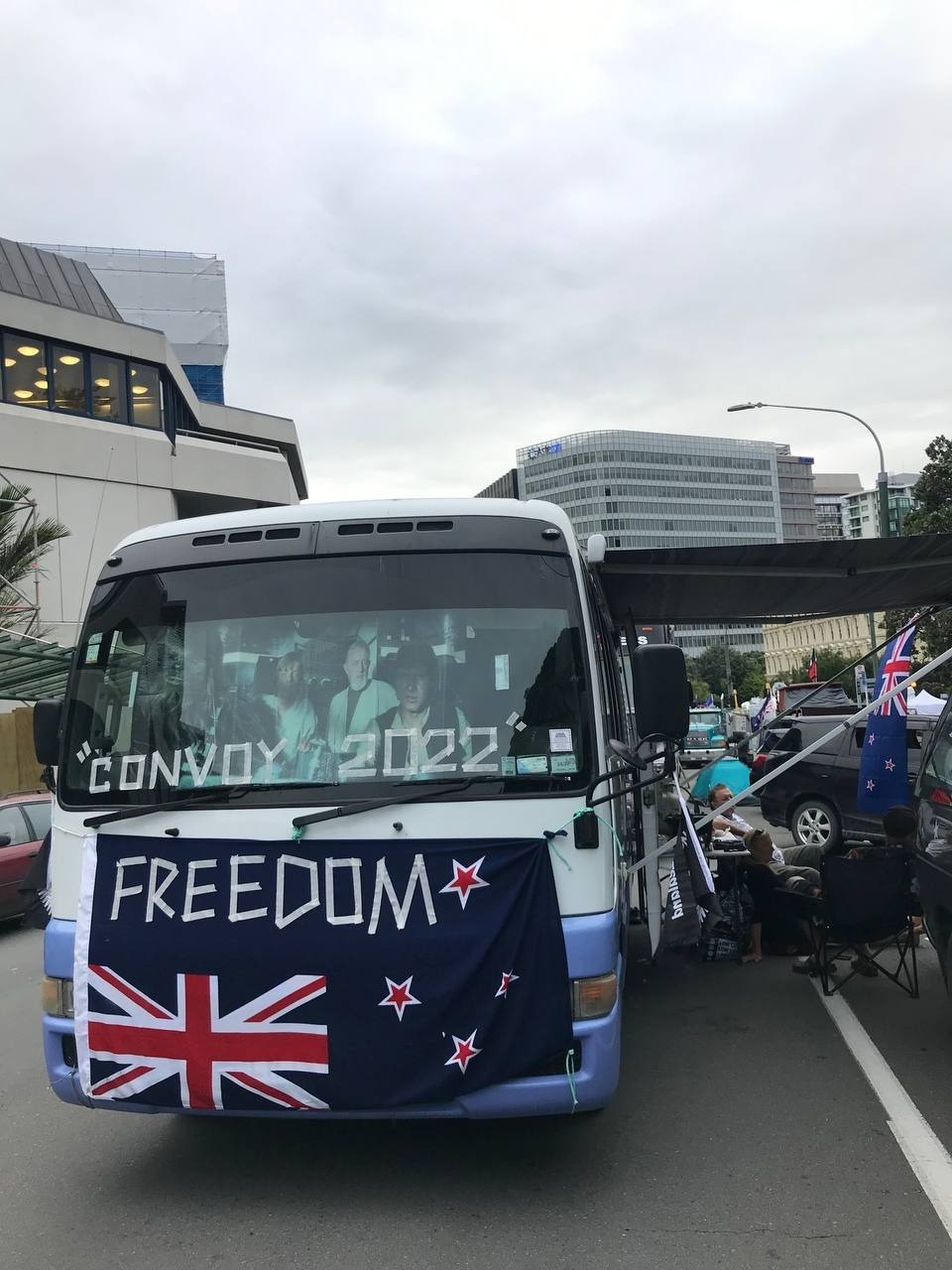 Today started well for our New Zealand Freedom Fighters. There were already plans for friends and whanau to travel down/up to Wellington this weekend to add to the growing numbers of peaceful activists outside Parliament buildings, ‘The Beehive’. 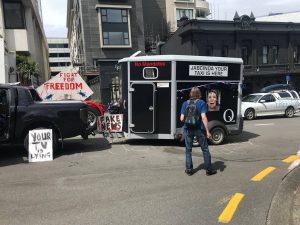 News of the Canadian Convoy truckers protests spread, despite the almost total blackout on MSM. The previous evening had been a happy music festival-type atmosphere; families had made impromptu camps in the carefully manicured park outside the building where our political ‘representatives’ are based. It must have made a strange sight looking down from those Ivory Tower windows, onto real-life Kiwi families cooking noodles for their kids on camp stoves and walking their companion dogs (and cats). 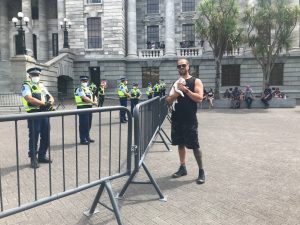 Early on, the police seemed to retreat from the makeshift 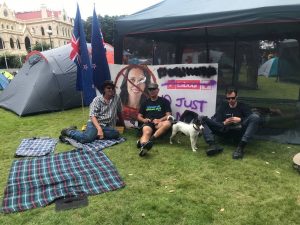 campsite, after previously standing in line, looking confrontational. But later in the morning, they re-assembled and formed strategic lines at the rear and in front of the protest. It was clear something was afoot and tensions rose.

Sensing trouble, many protestors sat down, as per the great advice from the Canadian Convoy (thank you, Freedom Fighter brothers and sisters). The beautiful music of our National Anthem was sung loudly and bravely from many who linked arms on their picnic blankets. Apparently one woman decided to strip off her clothes, presumably as a symbolic statement of her bodily autonomy (plus the weather was hot and humid!).

But it wasn’t long after that, when the true intentions of the police instructions become clear: escalation and arrests.

The lines of police far outnumbered those protestors on the front line of the camp, nearest to the steps of Parliament. The police, linked together for strength, began pushing in unison, against the protestors (many of whom, were sat down). “Hold the Line!” they all shouted repeatedly, as some backed up and exited, seeking safety. 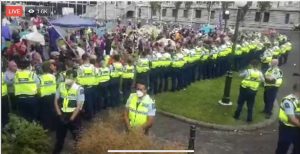 The police are supposed to be upholding the laws of New Zealand – not breaking them. But the police seemed to want to gain ground that the protestors occupied, in order to pick-out some weaker ones to arrest simply for ‘being there’. It was a strange way to behave and many bystanders were mystified, recording the scene on their phones, confused as to why the police would deliberately want to antagonize perfectly peaceful protestors. Remember some of the police themselves have been sacked for not adhering to the vaccine mandates. Booster mandates are imminent for police, teachers and many other public service workers.

More and more people were picked out from the crowd (for reasons that weren’t clear), handcuffed with cable ties, arrested and taken away. None seem to resist arrest. Many were in shock. The watching crowd repeatedly shouted “Shame! Shame!” and ‘Boo’d’ loudly at the police for letting us all down. Then, suddenly, another few people were dragged away and then the naked woman was dragged out of the crowd  – shockingly, by her hair. The threw her to the ground and with no respect for her nakedness, cable tied her hands behind her back. 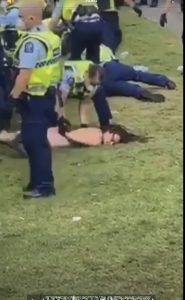 A paramedic stood by with a sheet, but rather than provide some dignity for her, and check her well-being, he covered her head with the sheet instead. In a scene horribly reminiscent of the #BLM murder of George Floyd, one of the heavier-set policemen proceeded to then kneel on her head. Gasps came from the crowd. This is NOT New Zealand. The appalling scenes were being live-streamed on multiple platforms, so it was incredible to think the police were beyond caring at that stage, whether their orders were illegal. These actions were harmful, in multiple ways, not least physically, but for the protestors’ children, watching nearby, potentially traumatised. 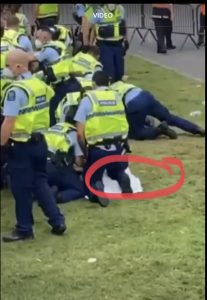 Unsurprisingly, our local groups are now mobilising themselves, with some travelling down to Wellington in second and third ‘waves’ of convoys. Some are collecting equipment and supplies to be transported down to the protest areas, to bolster morale and together we will Hold the Line!

This afternoon, Voices for Freedom have called for support to peacefully protest outside every police station nationwide, to raise awareness of the abuse of power by police, and the right to peacefully protest, as per our New Zealand Bill of Rights Act, and other Human Rights laws. Tomorrow, many parents will keep their children out of school, in protest of the unethical and harmful face mask policy. People are rising up and demand to be heard. 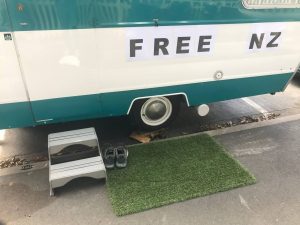 Whilst New Zealanders here and all over the world, come to terms with the sad reality of the dramatic end of our Freedom and Democracy, we will reflect and re-group and come back – better and stronger. I sincerely hope the woman we witnessed being violently mistreated by police today, is OK.

We will NOT give in to tyranny. We will maintain our basic human right to peacefully protest against illegal and unethical vaccine mandates. We will fight together for our freedoms. Kia kaha! 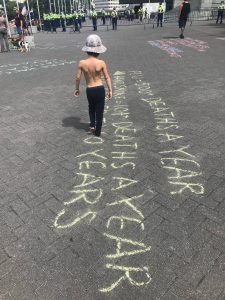 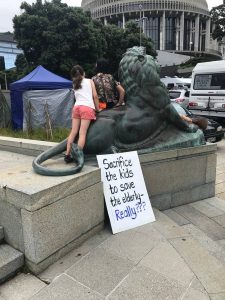 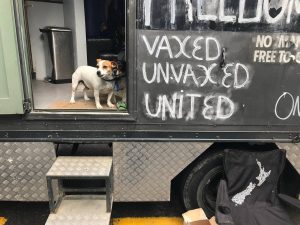