Pfizer’s documents have been made public

There has been a long wait for the truth to come out, and many of us had a harder time waiting because of the serious harm the establishment has been causing to the general public. Thankfully, this long wait is now over, and people can now see Pfizer’s contracts and important hidden details about the real risks are now public. It is important to add that more details will come out in the coming weeks at a fast pace, and this is all because of a court ruling that the health corporation shall make public 55 thousand pages per month, instead of only 5 hundred. Remember when Cristian Terhes, a rebel MP from the European Parliament, announced and exposed the fact that the majority of the clauses in the contracts between governments and the corporations representing the COVID-19 vaccine developers were hidden from the public and even the European MPs? Well, now everybody is getting access to information that, you know, brings us toward the ability to make a “Yes or No” informed consent. Furthermore, it has been revealed that Pfizer made 47 billion $ last year on the COVID-19 mass vaccination campaign. We live in a world that is now turned upside down, and many people are seemingly hypnotised by the mainstream journalistic agencies, political parties and leading corporations. A strong sign that this is the case is how the same people who paid a deaf ear to the unprecedented number of COVID-19 vaccine-induced adverse reactions and deaths are now robustly condemning Russia for tyranny and warfare upon Ukraine, and saying how they are supporting freedom, love, peace and safety. 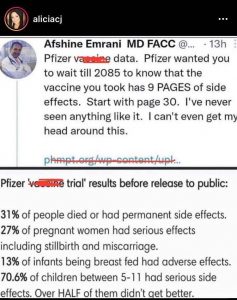 The new documents have recently been published on the following online directory: https://phmpt.org/pfizers-documents/

We suspect that doctors and nurses then started adding more placebos among the vaccines so fewer people would suffer from adverse reactions and die over a given time, with the purpose that the masses would not wake up. For example, a German nurse was caught giving a placebo vaccine to over 8,000 recipients in the summer of 2021. Furthermore, we are seeing that the governments of the UK and the USA have started to cover up numerous deaths caused by the adverse reactions of the administered COVID-19 vaccines and said there were no links between the registered deaths on the VAERS and MHRA databases and the administered vaccines. 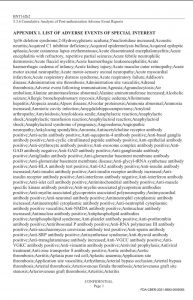 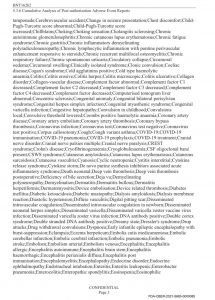 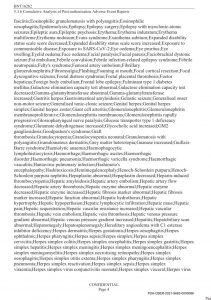 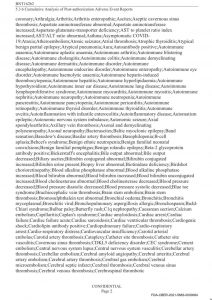 The fact that antibody-negative and antibody-positive anti-interferon activities are among the adverse reactions of the mRNA vaccine sets a new precedent with regards to the magnitude of adverse reaction impact upon human immunity, since interferons represent the frontline workers of the immune system. Antibody-negative means there were no autoantibodies found, whilst antibody-positive means there were autoantibodies found, and so the mRNA vaccine can sometimes not only cause a delayed and exaggerated production rate of interferons, but can also cause the immune system to develop antibodies as a result of this abnormal production rate. This is yet another piece of evidence that would convince any health authority and politician with common decency to stop with this chaotic and visionless COVID-19 mass vaccination campaign. Furthermore, it was shown that the effectiveness rate of the Pfizer vaccine is lower than 25% for children, and also that about 9 in 10 COVID-19-related deaths were in fully vaccinated patients (mostly in the boosted) in England. Likewise, how could such governmental policies around the world with regards to mandatory COVID-19 vaccines not constitute crimes against humanity?

The New World Order agenda lies behind the Ukraine-Russia war:

I really believe the current events are equivalent to an entire human race being stuck in a conflict between a grand bear, a dragon and a grand snake. The grand bear attacks anyone who attacks it beforehand. The dragon uses the grand bear before it consumes it with its fire, so although it is more perfidious and waits for the grand bear to become tired, it still attacks pretty directly after a while. The grand snake, however, waits and uses both the grand bear and the dragon so it will eventually eliminate both of them and enslave the entire mankind. Likewise, the dragon is more dangerous than the bear, whilst the snake is more dangerous than both the bear and the dragon. The grand bear in this case is Russia, whilst the dragon is China and the grand snake is the UN with NATO and the New World Order. This analogy was inspired from an Orthodox Christian priest in Greece, Father Elpidios Vagianakis, and I personally believe his scenario fits the current events very well.