It is now time to name and shame

The time to talk and plead with people in positions of power has ended. We have tried to reason with corrupt authorities for too long. They have not listened to the people and officers instead engaged in violence and intimidation in several places of the world. They have persistently ignored people’s pleas to investigate the crimes against humanity committed by worldwide governments with regards to mandatory COVID-19 vaccines, mandatory wearing of face masks and forced lockdowns. The ultimate enemies of the free world are the zealous overlords and their obedient servants from the World Economic Forum, World Bank, United Nations, the World Health Organisation and Big Tech, whose central headquarters are in Silicon Valley.

The people have seen the absolutely shameless approach by such authorities, who were supposed to honour their oath and stand with them. We have seen how peaceful protestors in Canada and other countries were beaten to the ground, punched in the face, hit with batons for dozens of times, shot with tear gas and rubber bullets and trampled by police horses. We have seen how politicians and corporations brainwashed people and turned them against one another, all because of a medical act that is full of errors and has unprecedented risks upon health. We have seen how the powerful have continued to fight against the people to try to implement Agenda 21 and Agenda 30. If we do not take a clear stance against the enemies of the people and of democracy, then the world will go down to a very dark place, and I believe getting actively involved to resist this is in the best interest of everybody.

Recently, screenshots of a conversation between multiple brutal policemen in Canada have been posted on the internet. We have decided to repost them because we want such people to be held accountable for endorsing crimes against humanity. One of them, Andrew Nixon, used a vocabulary from World War 2 when he referred to the repression of the Freedom Convoy protest. Such people are no different than the nazis of Germany, and this is one perfect reason why organisations like We Accuse exist, to make sure that all such extremists around the world will be held accountable in a special kind of Court. 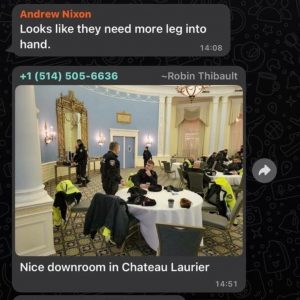 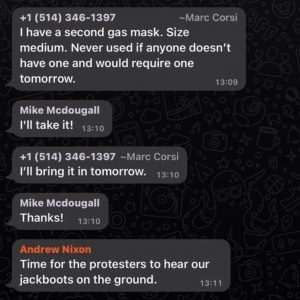 These people, alongside the criminals in the UN, the European Parliament, the US Senate, the worldwide governments implicated in the New World Order and leading health corporations, should be all taken to such a Court and be given proportionate punishments, for all the deaths caused by the adverse events of the experimental vaccines, for the unprecedented dangers of such vaccines upon the immune system, for all the suicides and devastated private businesses by the draconian lockdowns, and for the societal segregation caused by the brainwashing of the masses. This is only the beginning, and all the wrongdoers will be exposed eventually. An important step to liberate the world from the darkness of lies is to show people the truth, as they have been hypnotised by the mainstream media and by pseudoscience.